We were going to go to the park today but when we woke up it was properly overcast and I had a strong intuitous omen of rain coming (my intuition helpfully provided by the weather app on my iPhone). So we changed our plans and headed for the Chocolateria San Gines which is supposedly THE place to go for churros in Madrid. The churros typically come with this really thick and luxurious hot chocolate for you to dip them in. They looked incredible in the photos and the place gets some really great reviews online, so we thought ‘why not’?

I’ll start off by saying the experience wasn’t great from the off. We arrived and there were tables and chairs outside like your usual café type place, so we naturally assumed we could take a seat and someone would come and take our order. OH NO. We tried to sit down and promptly received an ear bashing in Spanish from a lady clearing one of the tables. Now, I have very limited knowledge of Spanish but I am 90% sure I heard the word ‘caca’ in the torrent of aggression that poured forth from her mouth, but I couldn’t be sure. Eventually a man in a chefs hat appeared next to us and lead us toward a counter where we were to place our order. It turns out you have to order first, get your receipt and a ‘ticket’, find a seat and then someone collects your ticket and brings your order to you. Self explanatory it was not.

We ordered 6 churros and hot chocolate and 2 ‘porras’ which are basically churros but the size of a babies arm. They turned up at our table really quickly, accompanied by what looked to be the worlds tastiest hot chocolate – such anticipation – we were practically foaming at the mouth. What ensued was not the delectable assault on the senses we had been anticipating. I’m not over exaggerating when I tell you that they were genuinely disgusting. They weren’t light and crispy as we had imagined; they were dense, doughy and chewy. They tasted of overused cooking oil and essentially how I imagine a part cooked doughnut to taste. The hot chocolate wasn’t much better, it was oddly tasteless and bitter and didn’t do anything to enhance the greasy batter sticks we were attempting to enjoy. We were disappointed to say the least. When you read reviews that say things like ‘the place to go for churros’ and ‘best churros ever’ you expect at least half decent product. I have made churros in my own kitchen that were 10 times better than these horrors.
Just to top off the event, the woman that had shouted at us earlier was lurking nearby desperate to be rid of us so she could clear the table so the next lot of tourists could consume the disappointing fare. My arse had barely left the chair before she swooped in and cleared away the remnants of our ‘churros’ (they are not worthy of the name). The only redeeming factor for the whole affair were the rather gorgeous guitar-playing buskers who were in my eye line the entire time. I even gave Enrique and Jorge (assumed names) €2 for their troubles, and possibly also so I could hide my blushing face in my bag under the pretence of ‘searching for money’ when they came round with a collection box. Somewhat deflated but equally inflated, we went back to the places we Segway’d to yesterday for some pics with less chins in them in front of varying ‘places of interest’, where we were mobbed by groups of British tourists asking us to take photos of them. My mum says its because I look ‘approachable’, but we all know they look me up and down and are so sure that they could catch me and beat me in a fight if I ran off with their phone, that they are quite happy to take the risk and place their £700 worth of tech in my hand. But whatever, my face is just so approachable. We nailed the awkward arm poses in our very own photo shoot and even swung about a lamppost like we were in the cast of Singin’ in the Rain – it was a glorious feeling (damn right I did). 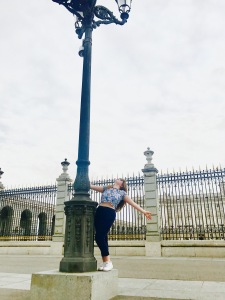 One thought on “Madrid: Day Two”