I had planned to wake up at 7.30 and go out for a run today (harhar), but as you can imagine, that didn’t happen and I ended up sleeping in until 9 am. We had planned to hire a car and go to Robben Island and take a drive around the Cape Peninsular, but by the time we got down to reception it was about 10.30 am and it was kind of too late to hire a car, plus there were no tickets available for the ferry to Robben Island as they were all booked up. That will teach us for not getting our arses in gear and booking beforehand.

It was a clear and warm day however, so we decided we would go up Table Mountain instead. The past couple of days had been a bit cloudy, so Table Mountain hadn’t been an option, mainly because you couldn’t actually see the thing. If I hadn’t known it was there, I wouldn’t have believed you if you had told me it was there. We bought tickets to go up Table Mountain online before we went, having heard that if you get a ticket when you are up there, you end up having to wait in a queue for hours.

We got a South African Uber up to Table Mountain, the driver was very knowledgeable and took the time to explain how to drive to Hermanus, telling us what landmarks to look out for on the way. I forgot all of this immediately, so I still have no idea how to get to Hermanus. I think I’ll probably just follow the sat nav to be honest, or I’ll just use the force. The force always seems to work out for me. I’m like a homing pigeon, I’ve got that internal compass.

We get to Table Mountain and we join the queue for those who already have tickets. Funny isn’t it, joining a queue so you don’t have to queue? It feels very British. It doesn’t take too long to get through and we are waiting in the loading bay for the cable car in about 20 minutes. Now, I hate cable cars. I know they are 100% safe, and it’s not even the height that bothers me. It’s the swaying. The swaying gets me and it completely shits me up, so I start getting a nerve on as we waited. This was relieved somewhat by watching the Chinese group of tourists in front of us taking photos of one another. They were taking shots of one another on their Hwawei’s like it was nobody’s business, and I spied a few hilarious chin shots being taken. These pics were legit 85% chin and 10% visor and 5% scenery, and I had to turn away to stop myself snorting at them.

We got on the cable car and it turned out it wasn’t so bad. The floor rotated As we went up so we could get a 360 view of the mountains and the views from it, and this kind of distracted me from any swaying. We stepped off the cable car and WOW. We were greeted with an incredible view. When I say incredible, it was genuinely astounding.

The sky was so blue and the greys of the mountain rock were a stark contrast. I got some amazing photos from the top of the mountain, which isn’t so flat when you get up there. In comparison to other mountains it’s still super flat, but there were lots of rocky bouldery bits, which made for great pics when you stood or sat on them, looking like you were about to drop off the edge of the world.

We spent about three hours in total on the top of the mountain. We walked all the way around it and took photos at all possible angles. The air up there was so clear and it was so worth it, but I just wish there weren’t quite so many people up there, so we could have had a bit of peace and quiet to experience it in.

If I ever came here again, I think I would get up super early and go to the mountain ready for the first cable car up to the top. I reckon this would be an incredible place to sit and have a romantic breakfast picnic, so if I ever locate a significant other, I will be forcing them to Cape Town and up the mountain and ridiculous O’clock in the morning. So, sorry about that future husband or wife.

After the mountain we took a ride to Hout Bay. The drive to Hout bay was incredible. Something that has surprised me about South Africa is the incredible difference in scenery in such a small space. You can absolutely understand why so much filming is done here, as the diversity of surroundings is amazing. The coastal road we drove down to reach Hout Bay had some amazing views, and I would have liked to have been able to stop more and take some photos, but you can’t have everything (plus we were on a meter). 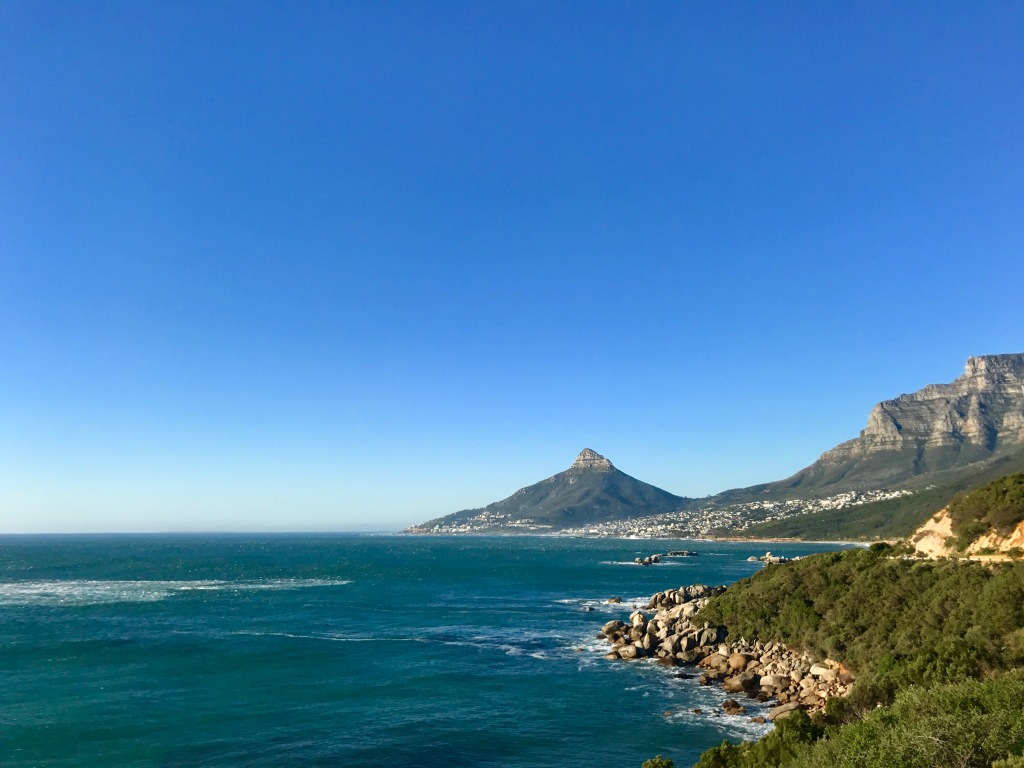 When we got to Hout Bay, I was half starved, so we went straight into a restaurant on the Mariners Wharf and had some baby Kingklip, covered in garlic butter (I can tell you now, I lived to regret this). We went for a wander along the beach and took some photos of the bay. We wanted to have a paddle, but the wind had got up by then as it was late afternoon and I think I would have turned into a block of ice the second my toe touched the water, so we avoided any paddling this time.

We got the bus back from here to Cape Town, and again, the views were absolutely astounding. It’s pretty hard to take decent photos on the top of a a bus, but I managed a few, trying my best to hold my phone steady over the rail of the top deck of the bus, whilst hold on to the camera, my rucksack and keep an eye on my iPad, which I was using to start writing this post.

Once we got back to Cape Town, this was where I started feeling the ill-effects of my butter consumption earlier in the day. I’m not supposed to eat dairy, and I know this, and yet I still insist on trying it and seeing whether it still has the same effect on me. Well, funnily enough, it did, and I ended up having to race back to our apartment pretty swiftly, so I could park my arse on a familiar loo. As soon as I did, all hell broke loose. I won’t horrify you with the gory details, but “better out than in” springs to mind. As does “natural disaster”. Heh.