Today we are making our way from Cape Town to Hermanus via the coastal road. We went and dropped of our rental car from yesterday and picked up our rental car, which we will have for the next ten or eleven days. We were geared up for a difficult trip around the city, with my crappy map reading, but it actually wasn’t so bad. Everything is much easier in the day light and we recognised a lot of landmarks and road names as we were driving along. We stopped off at the first car rental place to drop off Gail and the luggage and paused to have another look at the map, to try and locate the second car rental place to drop the car off at.

The second we stop, that is when I lose my bearings on the map and start getting really confused. I have no idea which direction we are facing once we have stopped and the whole map thing makes even less sense to me than it did before. I try pointing the map in the direction we are travelling, but then I can’t read the road names and I start to get flustered – stupid illogical brain. But, as it so happens, the other car rental place was literally 100 yards from where we were. All we had to do was drive across the intersection. This was made much more difficult by a massive truck with a digger loaded onto the back of it, trying to make its way up this narrow road, and a very impatient Fiat Punto behind us.  After a tiny bit of gesturing and waving, we managed to free ourselves of the truck and angry Fiat man, and made it to the place to drop the car off.

We loaded all of our gear into the back of a Hyundai Tuscon and made our way out of Cape Town. At this point I feel the need to mention that I have never made it out of a city so easily, as we did Cape Town. It was really clearly signposted and once you were on the right road, you were out of the city in no time. As we started driving towards the coast, we headed past a few townships (which I love looking at). Townships are like shanty towns or favelas, for those of you that don’t know. And all the houses are made out of bits of corrugated tin and plastic and whatever else can be found. Soon we were driving down the coastal road, but it was a teeny bit overcast and everything was looking a bit grey.

After a failed attempt to find breakfast in Gordons Bay (which was basically a ghost town and made us feel super uncomfortable), we found somewhere to eat in Pringle Bay. We found a cafe with some seats outside and I settled for a rosti stack; which is posh for hash browns, bacon, tomato and omelette. But a glorious stack it was, and it certainly filled a hole.

The waitress who served us was really sweet and she was practising her English (she spoke Afrikaans) and she was telling us about a riot that was going on in a neighbouring town, which had meant some of the staff couldn’t get in today. We had to go through this town to get to our next destination. Gail wanted to find a route around it, whereas I wanted to drive through it so I could see what it was like (classic Bonnie). It was my turn to drive, so I decided we were going to drive through said riot town, so we could have a look.

As we were driving towards the town, we could see some smoke rising. It looked like there was either something on fire, or a very big chimney spouting a lot of smoke. As we drew closer we could see there were lots of smaller fires as well as this big one. It was difficult to see whether it was houses that had been set on fire, or just fires that had been built, as it was up on a hill. As we got into town there were loads of police blocking off the main road and the fire engines were on standby. We had to bypass the main road and weave our way through the back streets to make it out of the town.

We wandered up the viewing platform and we came across one little guy right next to the walk way. I could have reached out and touched him, and I was desperate to, but I stopped myself. Knowing that A) he would have bitten me, and B) you shouldn’t touch them.

I took about a thousand photos of this little penguin and had a long conversation with him about the price of fish. Well, more just the random rambling (normally) one sided conversations that I have with animals I come across.

After I had my fill of the penguins we started heading back to the car and we saw a dassie, which is like a big rodent thing and looks kind of like a guinea pig. This little guy was clearly in need of a back scratch and kept rolling around on his back. He looked so funny and it made me laugh like a complete idiot (checkout my Insta to see a video here).

After that we whizzed all the way to Hermanus without any stops and located Les Baleines bed and breakfast after much driving around. This bed and breakfast in Hermanus is all kinds of beautiful. The rooms are gorgeously decorated and the bathroom is incredible. It’s worth staying a little outside of the town for such an amazing place. For dinner, we went to Burgundy restaurant on Marine Road. It had been recommended by the staff at the B&B and in a couple of the guide books too. The food was incredible. End of. We started off with some homemade bread which was sweet and full of seeds and nuts, and I had a main course of bobotie which is a kind of curry with an egg topping. I had the veggie version which was made with lentils and came with pumpkin fritters. I thought I had died and gone to heaven. 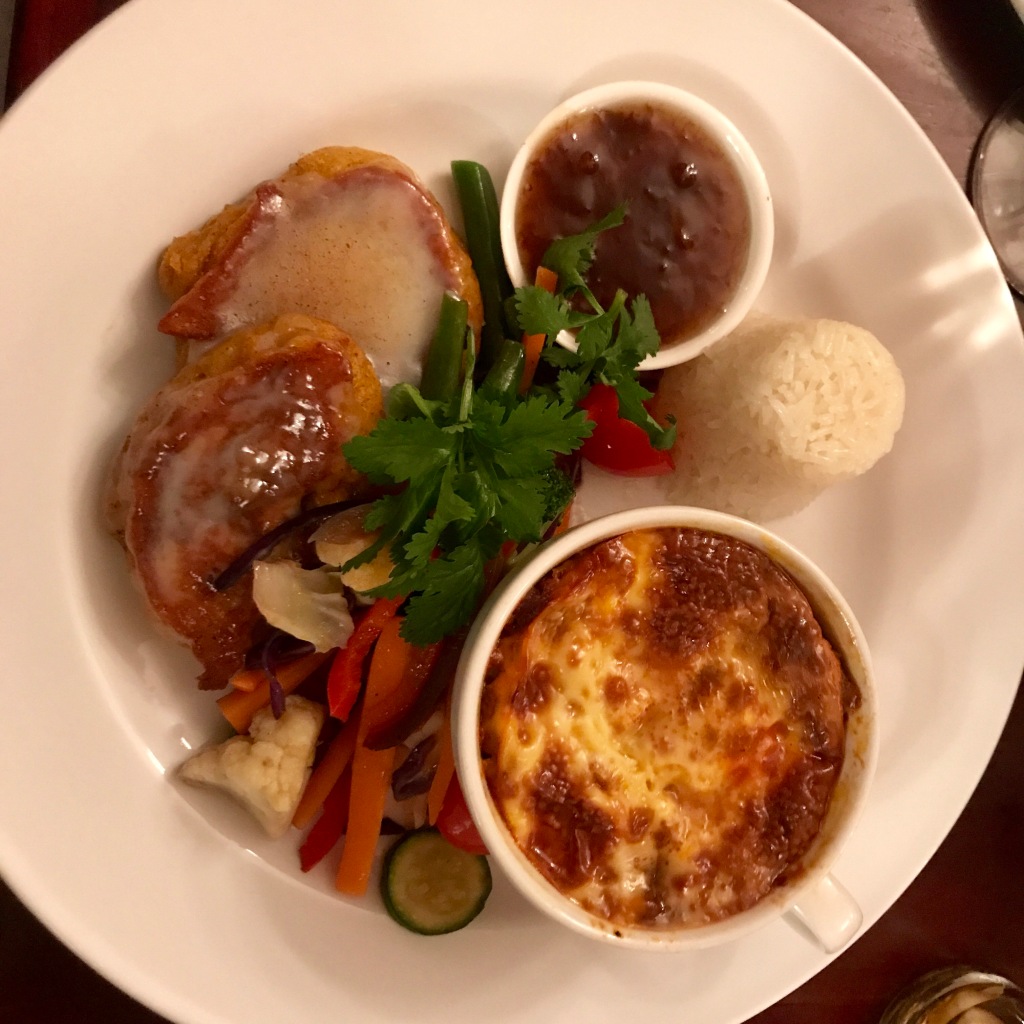 2 thoughts on “South Africa Day 4: The Road to Hermanus”