We’d had some lunch and chilled for a bit, and whilst we were sitting at the lodge some ngala came up really close to us and were eating some of the vegetation nearby. These creatures are so sweet and they have such endearing faces and eyes. 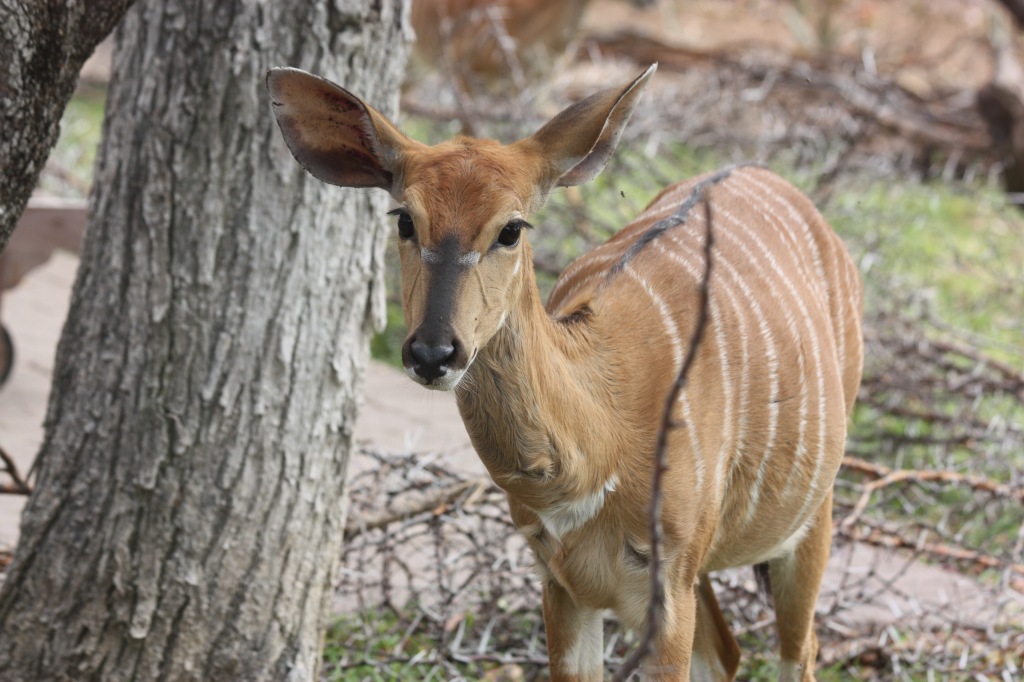 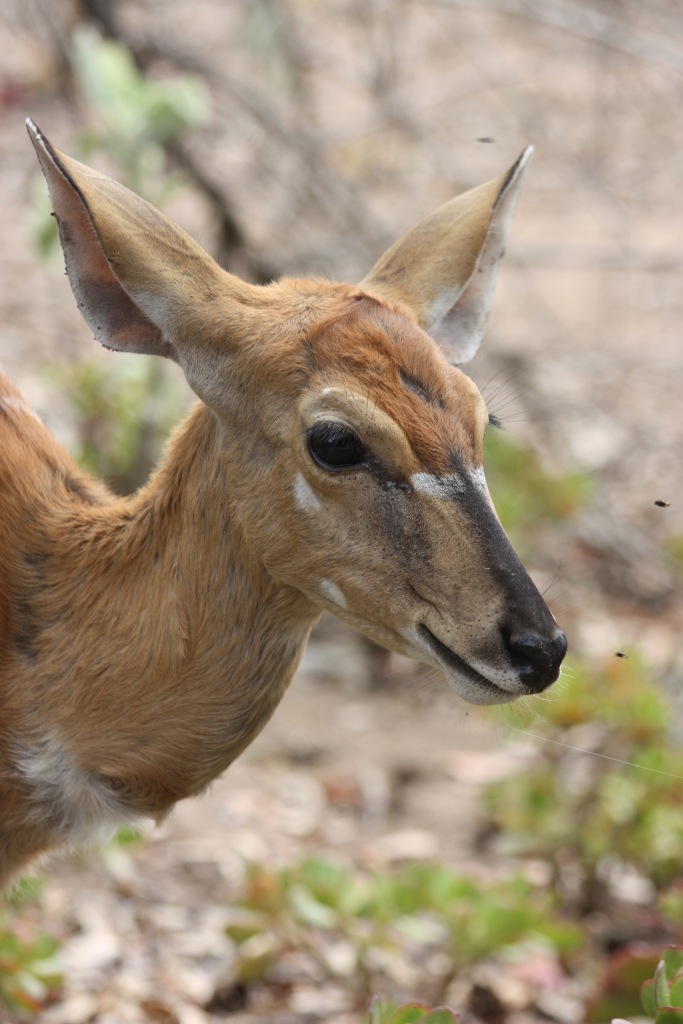 The wind was still up and it was looking fairly overcast, plus it was quite chilly. We went out to see if we could see a leopard. Victor (the tracker), or Uncle Vic as he is affectionately known as, found tracks of a female leopard. We couldn’t quite tell where she was headed, but he made a guess and we scouted about for a bit, but didn’t see anything. He guessed that he had probably headed off in a particular direction, and we would come back later to see if we could find her.

We saw a few giraffes on the airstrip, which was cool. Apparently, they are a nightmare when light aircraft come in to land and the guys need to clear the runway. The giraffes come straight back onto the tarmac as soon as they are shooed off and they have to be kicked off again. 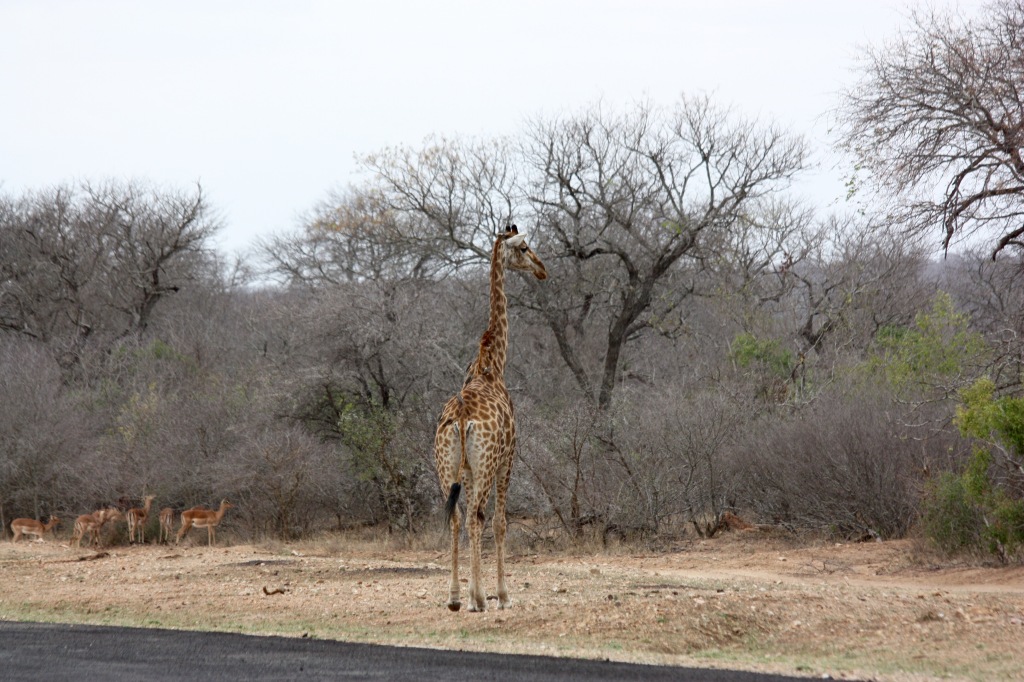 There wasn’t much to see this evening as it was still windy and it makes the wildlife go to ground as they can’t hear and smell as effectively. We drove around for a while following various tracks of various animals, and came up with nothing. We were trucking steadily along when I happened to look up at something which had caught my eye (I assume it was a bird) and my hat flew off. Rats! I wouldn’t have worried about it, but it was brand new and I was using it to try and protect my face a bit from the windburn that was removing my top layer of skin. We skidded to a halt and the hat was retrieved, in one piece, but somewhat dusty.

We headed to a small body of water, where we managed to see some hippos. Hippos are the most dangerous animals by far in Africa, particularly when it comes to humans. They are exceptionally territorial, and if you get to close or upset them too much, they will try to kill you. They don’t eat meat at all, but they don’t think twice about getting rid or something causing them bother.

The guide told us a story about an impala he had seen running away from some wild dogs. The impala had tried to swim across the water, but the wild dogs had met it at the other side. It tried to swim back, but the hippos had had enough, and killed the impala right there in the lake. They then wandered off to the other side of the water. This goes to show how angry they can be.

We also saw a tawny eagle standing at the edge of the water, taking a drink.

We trucked on for a bit and came across some wildebeest running around madly in a clearing in the bush. They were playing and chasing after one another, and kicking up quite some dust. They kept running around in circles and butting in to one another, it was really funny to see. We also spotted some hyenas running down the road and they crossed in front of us. We suspected they were heading towards the giraffe upon which we had seen the vultures feeding earlier.

We followed the hyenas, but as soon as we got back to the giraffe, we got a call on the radio about the leopard we had been tracking earlier. It turns out she had done exactly what the guys had thought she would do, but we had missed it. We raced in the truck to see if we could make it to the area before she disappeared (having to dodge a few bushes along the way), but we missed her, and she disappeared into the thick bush. Damn.

After that, we got another call from one of the guys saying that a male leopard had been sighted next to the airstrip, so we went that way as fast as we could. By now, you could feel the guide and the tracker getting frustrated, we had been after a leopard all day and we hadn’t managed to see one. As we got to the area where the leopard was sighted, we couldn’t see anything. He’d slipped into the bush and the guys were struggling to locate him in the dark, and the dense thicket. All of a sudden, we managed to catch a glimpse of the male leopard, winding his way through the undergrowth, but it was only for a second. Just enough for me to recognise that it was a leopard.

We’d lost him again and we really couldn’t see him this time. In multiple locations, we tried navigating through the bush using the truck. We came crashing over fallen trees and poor Victor on the front was having to fend off the branches and thorns like a madman, practically bending over backwards and laying on the bonnet to avoid being attacked by a tree. I came a-cropper on a number of branches, including one which decided to spear my hood and strangle me a bit.

It started raining, and it was decided it was time to head back to camp. You could feel the guys were raging about having not been able to see the leopard, and were upset that they hadn’t been able to show us. The elusive leopard strikes again! Funny, considering they are the most abundant cat in the area. But you don’t get to be the most abundant cat in the area for nothing. To be honest, I think we all thought it was a great laugh crashing through the bush and getting impaled with branches. Well, I did anyway.