Today we headed up to Squamish and Horseshoe Bay; a couple of hours outside of Vancouver. It’s a pretty drive once you get out of Vancouver and get past all the red lights and stop signs available to screech to a halt at. I do so love coming to a smooth stop – I’m really starting to miss it… Anyway, we stopped off at Shannon Falls on our way up. You can walk up the trail here and you come to a pretty waterfall. There are a few steps to go up, but it’s not too tricky. It took us about 30 minutes to walk up, take a few photos and come back down. There are two levels on the Shannon Falls trail – the first gives you a view of the whole waterfall from the front, the second (a bit further up) gives you a more side on view, so you can see the torrent of water coming down.

I had some pent-up energy (on account of having done precisely no exercise since the last week) so I took a little jog up the steps… That certainly relieved me of all that pent-up energy.

We carried on our journey to Squamish. There isn’t a tonne of stuff in Squamish; it’s more about the journey to be honest, but there are some nice gift shops with some native art in them and some places to grab a coffee and a bit to eat. We stopped for lunch at a little place called Green Olive Market and Café, run by a husband and wife. I opted for a Greek salad for the following reasons A) Who doesn’t love a Greek salad? And B) I was starting to worry I was getting scurvy because they don’t seem to eat vegetables in Canada.

On our way to Horseshoe Bay from Squamish, we pulled in at Porteau Cove. As the name suggests, it’s a cove (who’d have guessed it). It’s got loads of drift wood which is well worth a climb over – I managed to get pretty far without having to touch the ground and without falling off. I hear balance is key here.

It’s really pretty here, with the water in the foreground and the mountains in the background and it’s so peaceful as well. It’s also got a campground there (Porteau Cove Provincial Park Campground), and if you were camping it would be a great place to stay I think.

I had a bit of an incident on the beach here at Porteau Cove. We’d walked down to the water to see how cold it was (pretty cold) and whilst we were down there, my mum asked me if I would show her how to do a squat – she’s thinking about working on her fitness and strength, you see. Now, I don’t profess to be a professional squatter or anything, but I definitely do them and I have done them in the gym as well, so that’s as close as you can get to professional in my eyes. So, I give her a quick demo on how to squat.

To show off my best squatting form, I prepare, get my feet in the right position and lower myself into a properly deep squat – I’m talking more than 90 degrees here. I regret this, and I’ll tell you for why. When I lowered myself in to the deepest of all squats, a thing happened. The thing that happened, was that I split my dungarees… My FAVOURITE dungarees [insert anguished emoji here]. As a cool breeze caressed my right buttock, I can only describe myself as entirely forlorn. I’m trying to look over my shoulder to see said split. I can’t see it, but I know it’s there – I heard it go and I can feel a certain chill overcoming my arse. Fortunately, I’m wearing a jacket which covers the split, which is a small mercy. Dejected, I head back to the car and I even sit in the front (a major risk to life), which I think shows the true extent of my pain. R.I.P dungarees – R.I.P… Rip… You get it? See, I’m funny even when I’m broken hearted.

We arrive at Horseshoe Bay, which again, is really pretty. We take a look round a souvenir shop and have a bit of a wander, trying to work up an appetite for dinner. We sit on the pier for a bit and watch some Amish people larking around in a group. They are all young – I’d say 25 and under. Whilst I am questioning the combination of ankle length, pink, floral dress and walking boots, one of the men wanders by, carrying a rather fetching replica Gucci handbag. I’m assuming it was his partners handbag, but I think it would be rather more fun if it was his, don’t you? 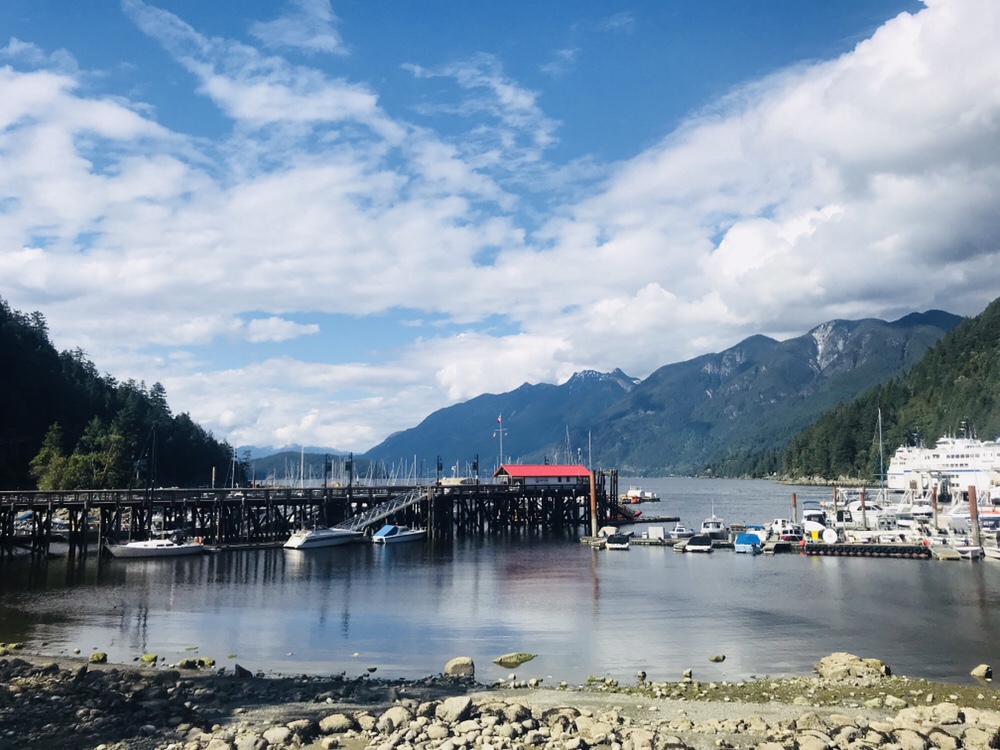 We went to Trolls for dinner. People seem to rave about it, so we thought we would give it a go. They are famous for their battered salmon, so I was after giving that a try, but they were fresh out of it, so that was a no go. I opted for cod, as the only other fish option was halibut and I wasn’t feeling that.

I’m not going to lie, it wasn’t amazing. It wasn’t bad by any means, it was tasty for sure, but I’m not sure it’s deserving of the reputation it has. I’m not sure what the moral of this story is, but I’d imagine it’s something along the lines of not believing everything you hear.

One thought on “R.I.P Dungarees: Squamish and Horseshoe Bay”