Today’s the day we start the serious driving. Our aim on this trip is to reach the Arctic Ocean in Tuktoyaktuk in the North West Territories – it’s about as far as you can go without actually plopping into the ocean. The first leg of the journey is to travel from Dawson City to Eagle Plains and you’re driving on the Dempster Highway. Again, ‘highway’ is a fierce stretch for what is actually a gravel road. We’re hoping to see some wildlife along the way – it’s not a massively busy road, on account of the number of people wanting to drive in the wild wilderness being relatively slim, so we are thinking our chances are pretty good. We really should have learned by now, that we are not blessed with frequent and numerate animal sightings… but we started our travels with high hopes nonetheless.

There’s a few trails around this area, but because it was a bit miz on that day, we didn’t opt for anything strenuous. We followed the Beaver trail along to a beaver dam, in the hope that we would spot some of the toothy little fellows. 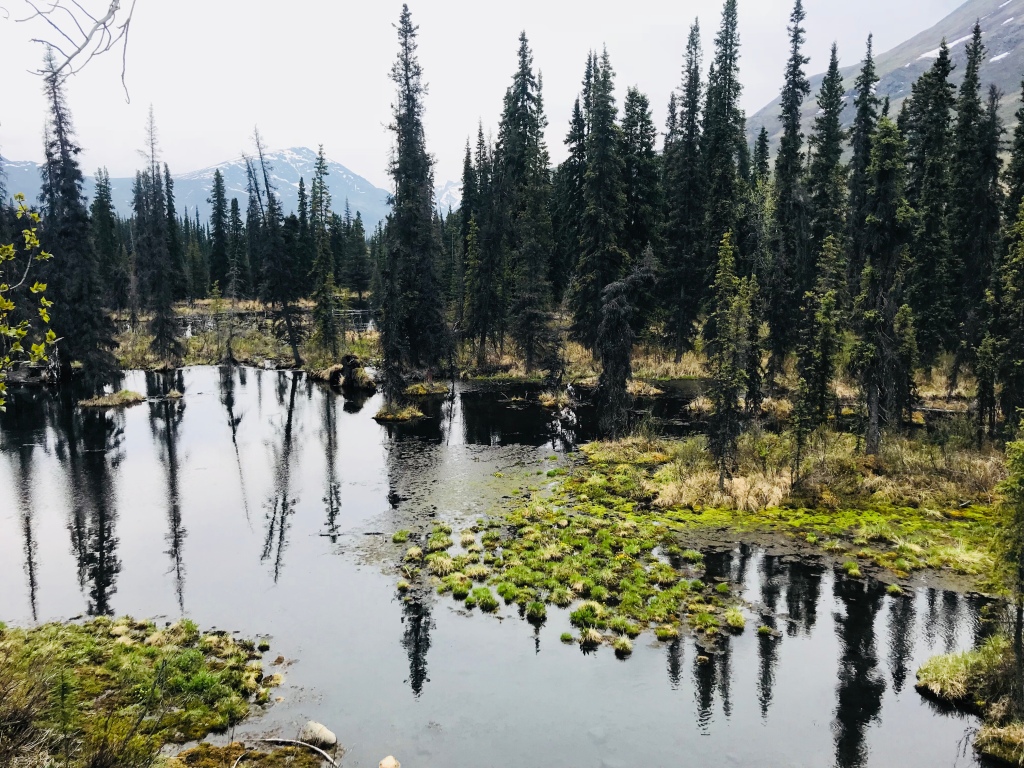 As I am sure you have already guessed, we did not. The most we saw was a sign of beaver habitation – a gnawed stump of tree.

The dry spell continues, as do the heart crushing feels. A chipmunk would do at this point… ANYTHING!! Whilst I was waiting patiently for a beaver to swim by (none did), I did see a squirrel (which I bet you can’t even see in this pic) and a bird. WOOHOO!! Not. No offense squirrel and bird, but we have you at home and you just aren’t what we made the journey for.

We continued along our way, keeping our eyes peeled for bears, moose and the like. We came across a creek; a red creek. This creek is red because it’s essentially rusty, which is pretty neat and it really stands out in comparison to the hundreds of very non-red creeks we had driven past that day.

So much of the scenery Is gawj, but as it was drizzling constantly there weren’t a lot of good photo ops.

After many, many hours of driving, we make it to Eagle Plains… just as it starts to snow. Now, we had heard that snow had been a possibility, but only on the high grounds, so we had thought we weren’t going to see any of those white flakes. Well, it turns out that Eagle Plains is pretty much atop a mountain, so snow shouldn’t really have been that unexpected. 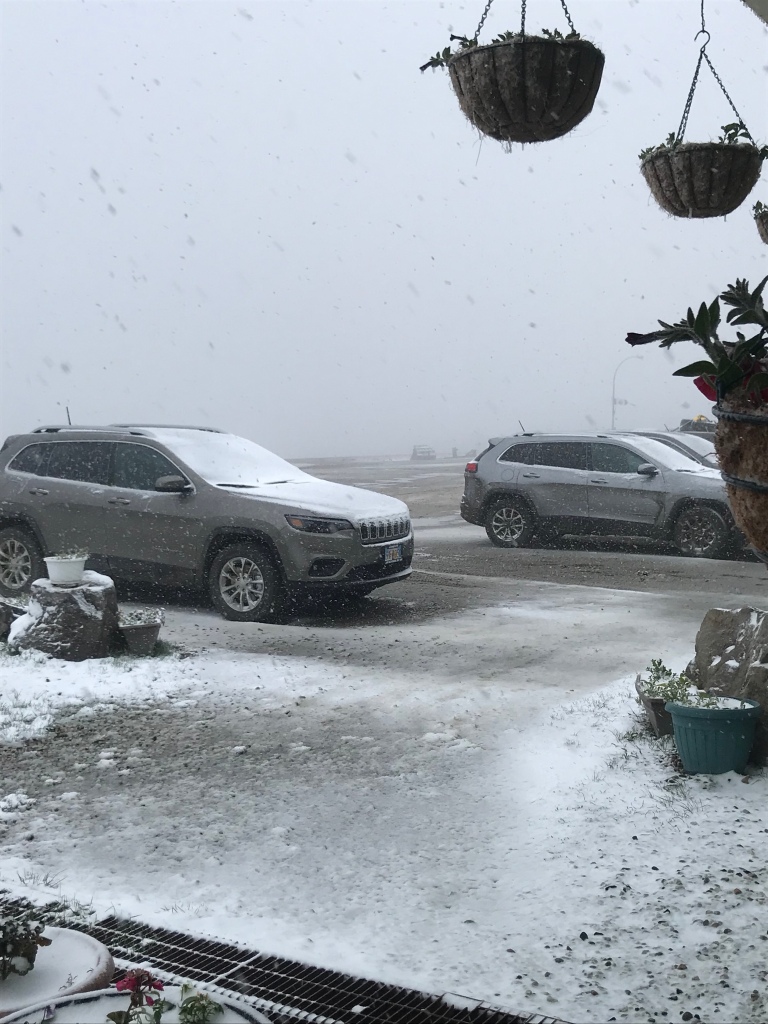 It’s chilling right down now, and we’re glad to get inside the one and only hotel in Eagle Plains – the Eagle Plains Hotel (no one messed around with a creative name for that one, did they?). The most interesting thing about this place is that it was built in the 80s and not a single thing has been done to it since. There is a fairly large crack in one of the windows in the dining room which has probably been residing there since about 1984. Amusingly, in the dining room the tables come equipped with a miniature sled containing your sugar, coffee cups, pepper and salt (with an extraordinary amount of rice in it). When I say extraordinary – I mean the salt to rice ratio was pro rice. 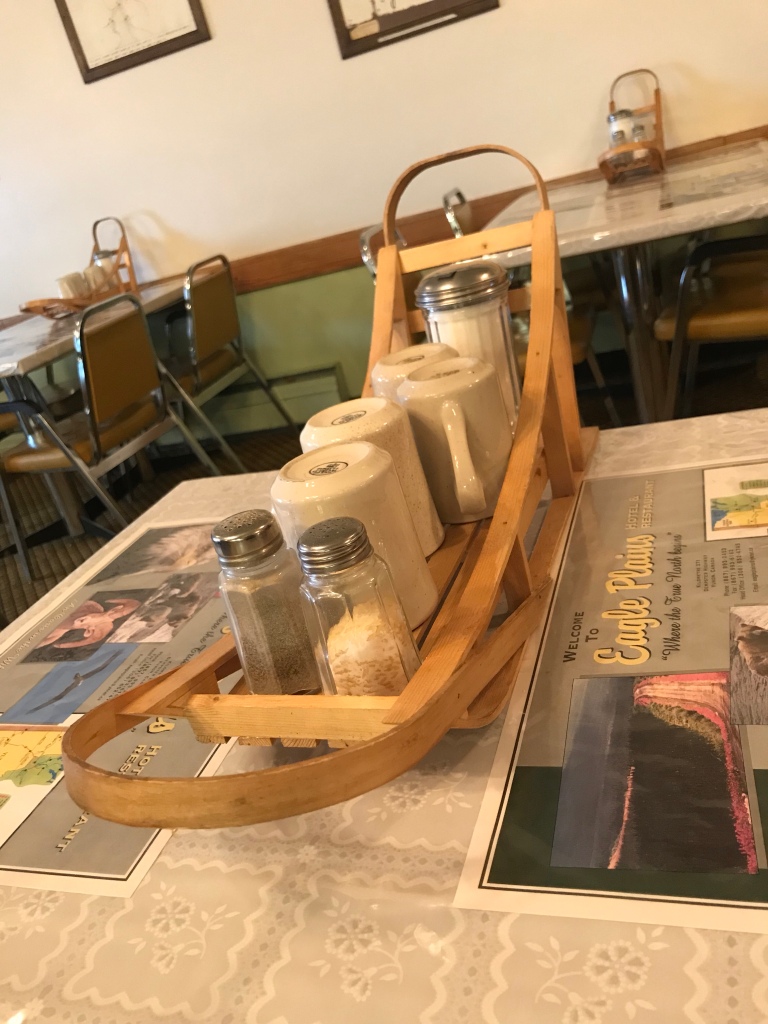 This is the only place to get food, so you have to eat here, but they have a relatively decent menu considering they are in the arse end of nowhere, and they have daily specials too. In the bar you are greeted to what I would imagine is approximately a national parks-full of taxidermy mammals. On the plus side, we did finally see a moose… Positively devilish don’t you think? 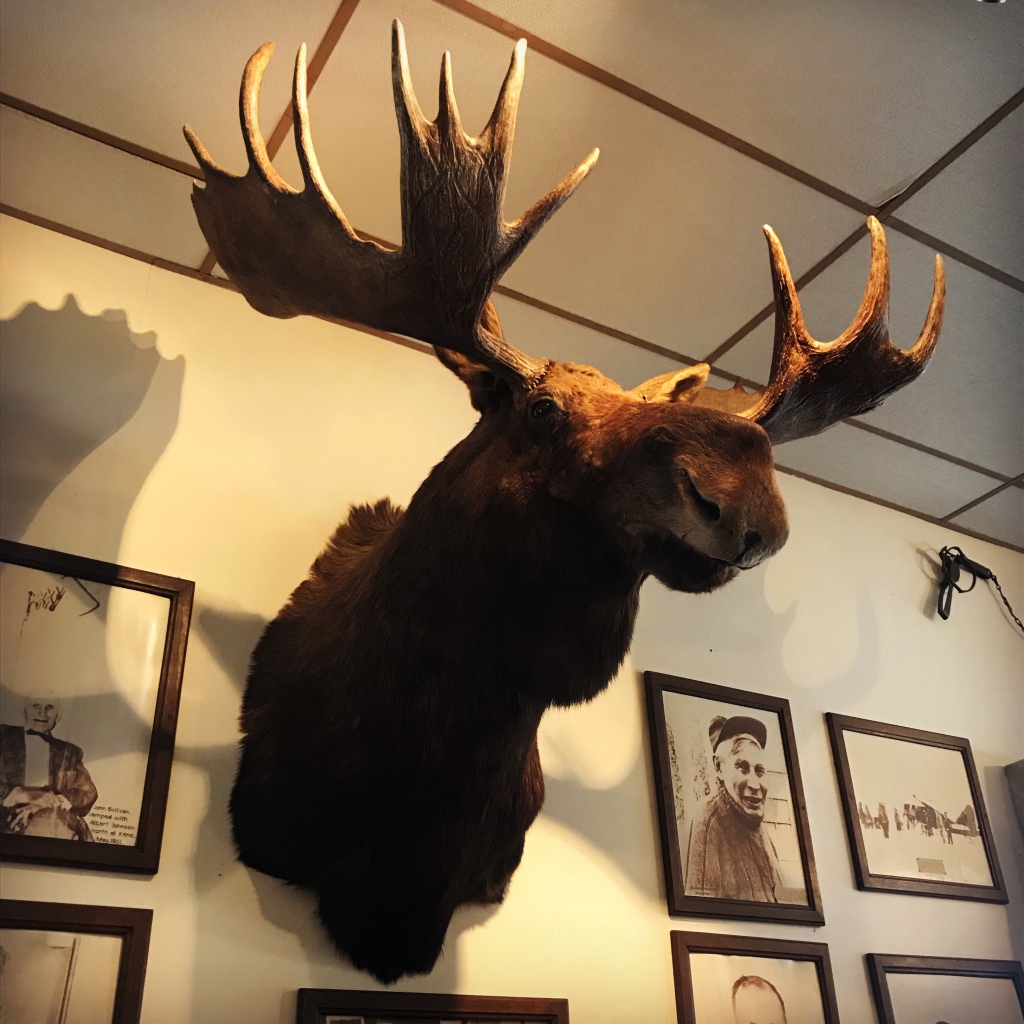 2 thoughts on “A rare moose sighting”