You may have noticed that I missed a day out, if you did – then thank you for religiously reading this – you and the one other person who isn’t my mum should probably get married or something. Anyway, the reason I missed a day out, is because on that day I did literally nothing. I didn’t wake up until about 1pm, and for a couple of reasons; firstly, because the sun is up here until about 1am, and secondly, because all the driving had knackered me.

When I did wake up, I sat in bed and read my book, replied to a bunch of messages and emails, progressed to watching re-runs of Friends, Will & Grace and 2 and a Half Men and then ate a fat bag of granola and drank about a gallon of coffee. All in all, a pretty productive day, wouldn’t you say? I needed a break in all honesty – holidays are tiring when you are on the move constantly, never sleeping in the same place for more than a couple of nights, driving and straining your eyes looking for the non-existent wildlife of British Columbia.

The next day I managed to rise from my coffin at a slightly more reasonable time, but in all honesty, achieved about as little. What I did achieve, however, was the consumption of food. There aren’t many places to eat in Inuvik, in fact, the only options you have are a couple of hotels and one family-run restaurant. If I were you, I wouldn’t bother with the hotels and I’d stick with the family-run, which is called Alestine’s, if you’re interested.

Alestine’s is only open from 5pm-8pm in the evenings, so make sure you get there on time. This place is a cute little shack on Franklin Road, where they do all their cooking out of the back of a bright yellow school bus.

The service is friendly, and you’re served by the wife of the family, who is rushed off her feet constantly because of the popularity of this place. They have about 5 main course options on the menu and one dessert, which are given to change as and when things are in and out of season, or when the chef fancies something different. We entered in and who else did we see sitting in there, but Susan and Michael! We promptly park ourselves down on their table and ask them what’s good on the menu. After taking that in, I order the fish tacos at the recommendation of Susan. I’ve never had fish tacos, but when in Rome and all that… 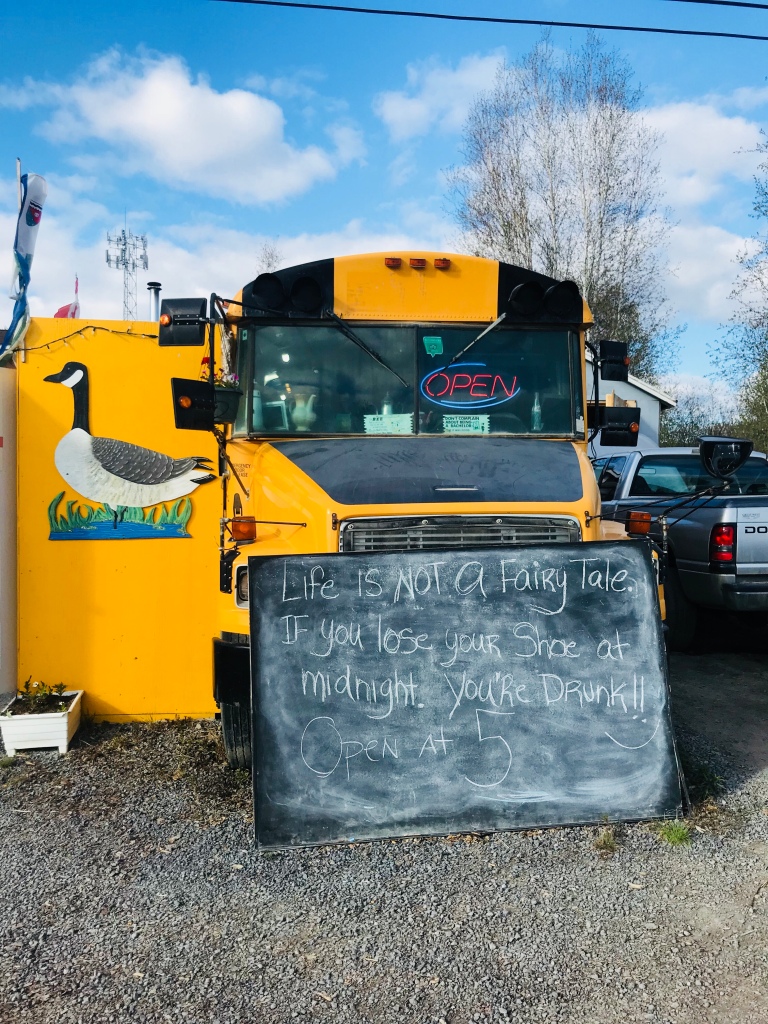 My fish tacos soon arrived, and boy did I enjoy them. They came with fries (as does everything in Canada) and they were filled with fried white fish, mango salsa and a light coleslaw. YUM!! I wolfed those down in about 8 seconds flat, got my hands covered in sauce and ended up with chutney all round my face – so it was a good meal for sure. It took all my mental strength to try and not wipe my hands on my trousers. I’ll leave you to decide for yourselves whether I managed that or not.

I’m so bad with wiping my hands on my trousers. I KNOW I shouldn’t be doing it, but I literally cannot help myself – the desire is too overwhelming. It’s clearly much more ladylike and polite to wipe ones’ hands upon a napkin of a serviette, but I just feel like my trousers really do the job better, and it’s obviously way better for the environment if I shun all serviettes and refuse to use them. That practically makes me an eco-warrior, doesn’t it? Doesn’t it??????

4 thoughts on “A lazy day and school bus suppers”