We headed to a place called Port Clements today, there’s not much there and to be honest it wasn’t really worth the drive, but we did stop for another slice of pie on the way there (see, told you I’d opened the floodgate). The pie was at a place called Angela’s place, which happened to be another gas station-cum-diner, or a ‘social café and fuel station’ as per the sign.

I’d say that this pie had a better filling than the previous nights, but the pastry wasn’t as nice… So, I can’t say which one was better… I’d possibly lean towards the first one as the whole experience was just a little better.

We stopped to see the Golden Spruce on our way back, which was a GIANT let down. Basically, it used to be this big gold coloured spruce tree, until some proper nut job cut it down in a protest. I’m all for a protest and that, but cutting down a super old one-of-a-kind tree? Nah. You can have a little read about that sitch here, if you’re interested. Anyway, so we went there to look at this stump, which was exactly that – a stump. I’ll give you £1 if you can even see a hint of golden in this pic… thought not.

In this park, there were some huge trees, like, properly massive trees. Well over the wingspan of one girl. Some of them, it probably would have taken about 8 or 9 of you holding hands to go all the way around the tree. 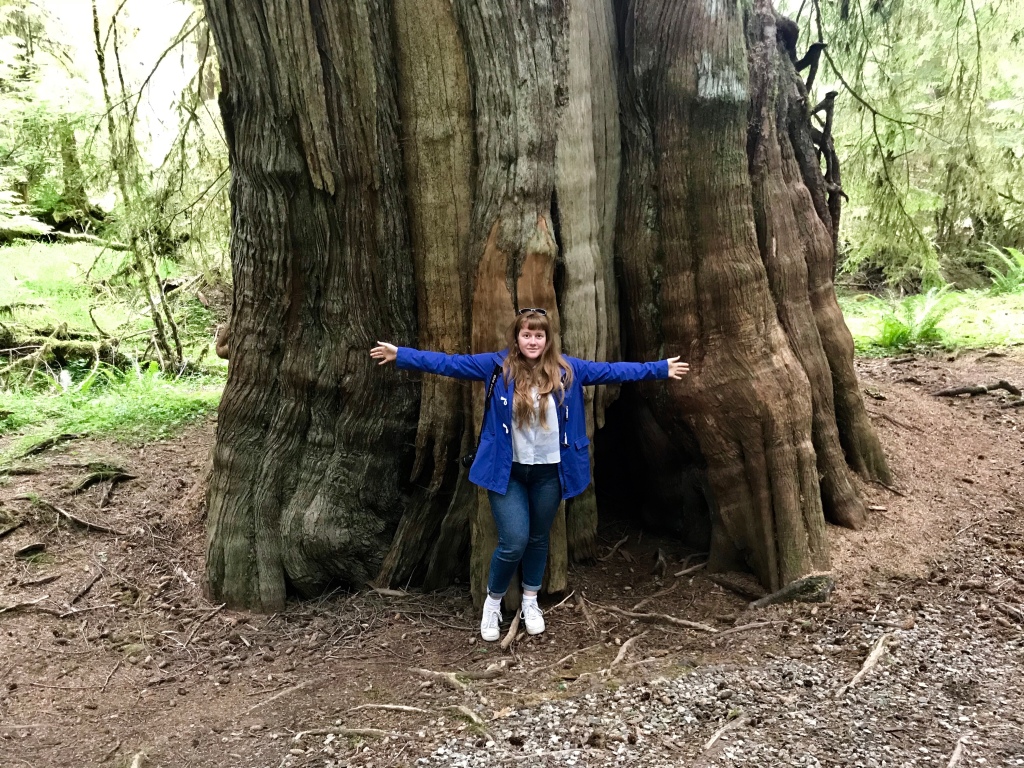 I feel like most of what I talk about revolves around food, but I’m actually fine about that, so here’s some more about food… Because dinner was SO good last night, we went to Sherri’s Gas Bar & Grill again to eat. We had a summer salad, which was mad tasty – I’ve never had raspberries, blackberries, mandarin and nuts in a salad before, but I WILL be having it again, Mouth-watering doesn’t even begin to do this justice. 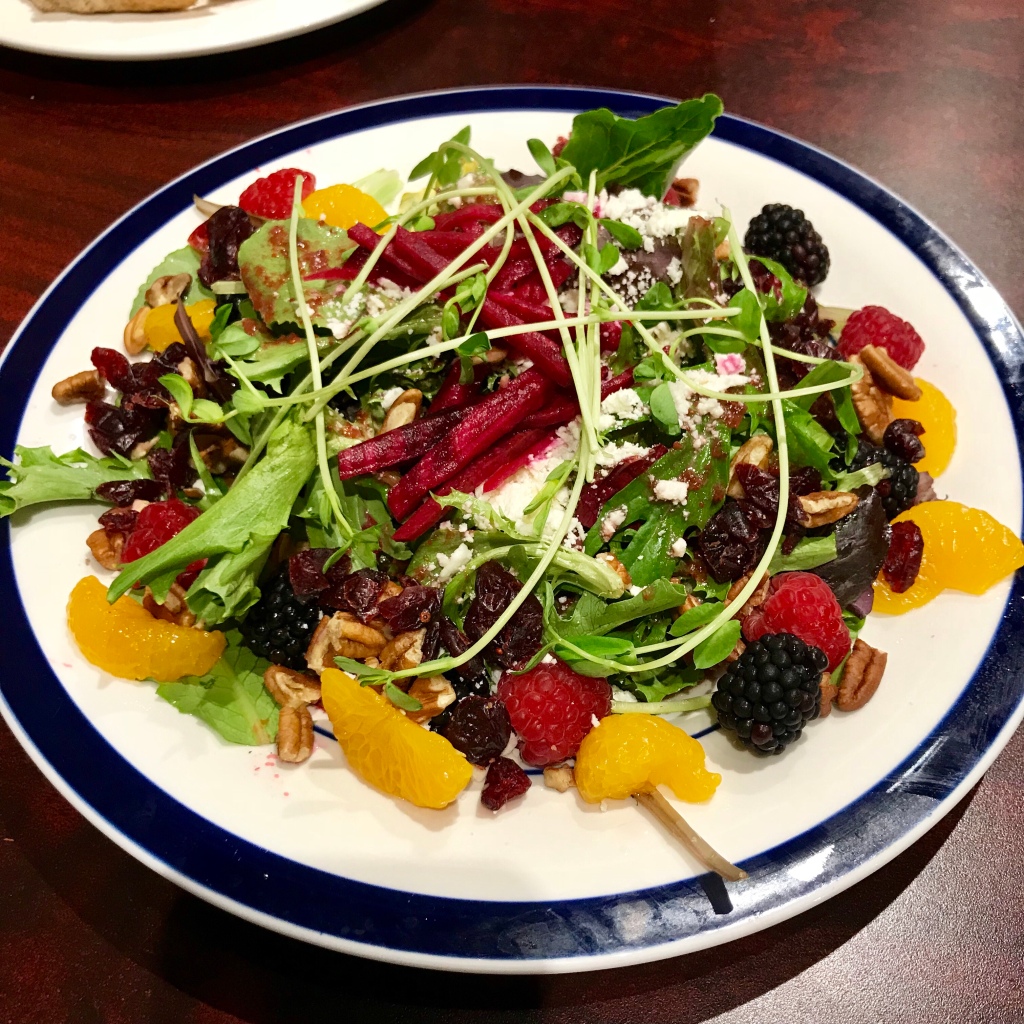 Following on from yesterday’s crab cakes, I couldn’t help but opt for another crab-containing meal. I had a crab patty burger, which was NEXT LEVEL. It was just… I can’t even describe it, it was so yummy. Moist, perfectly seasoned, beyond fresh. I could wax lyrical about this crab burger for the rest of the day if no one stopped me. Is anyone going to stop me? I tell you what would stop me though; stuffing my face with another crab burger.

Obviously, there was room for pie. Apple pie and lemon meringue pie (promise I didn’t eat both slices on my own). Apple pie was distinctly better than the lemon meringue – nicely spiced, pastry was fierce and the whole thing was just on ittttt. 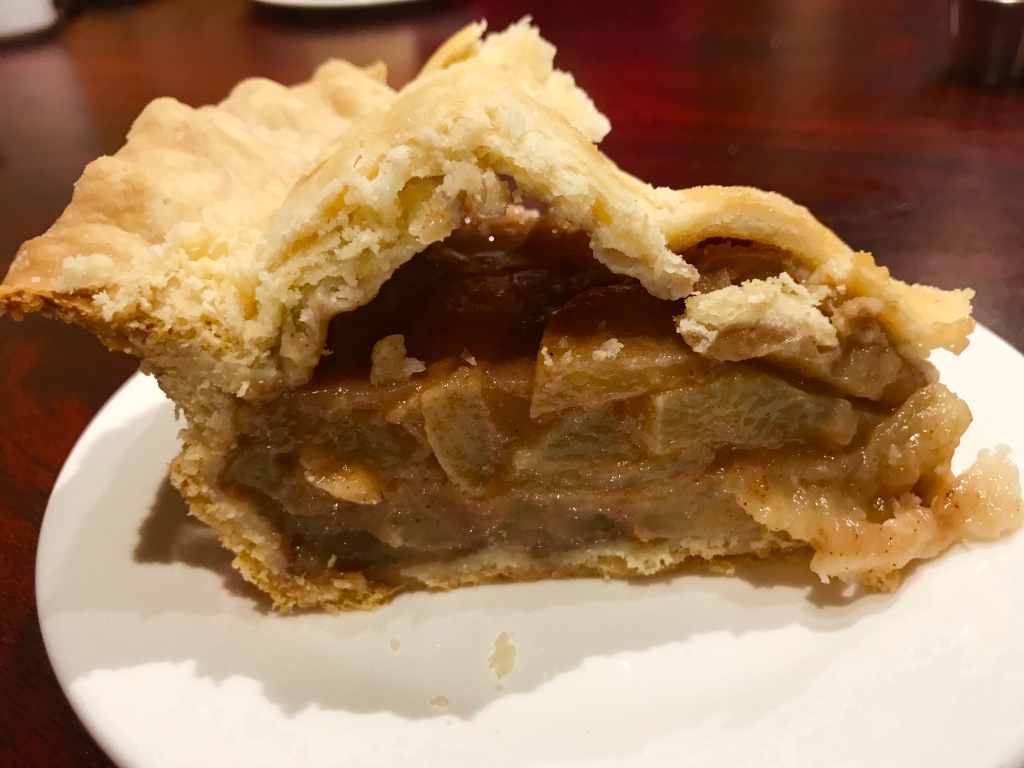 Yummo. See, pie is becoming a serious problem for me. Like, it may even be an addiction. I’ve had 3 different kinds of pie in 1 day. HELP!